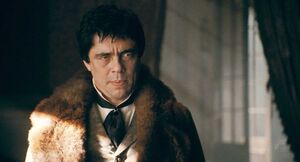 Lawrence Talbot is played by Benicio del Toro in The Wolfman 2010 film.

Lawrence turns into a werewolf a few nights after having been bitten by his father Sir John Talbot. Lawrence kills a couple of villagers who set a trap for him using a stag. At this point Lawrence is taken to an asylum where he learns about his father being a werewolf. Lawrence escapes and kills his tormenting doters, rampaging through London, before confronting his father on the following night. He ultimately kills his Wolfman father, ends up biting Francios Aberline of Scotland yard, and pursues Gwen Conliffe. After cornering her to a waterfall, he manages to regain control until the villagers arrive. However, he is shot before doing any possible damage to the one he loves.

Retrieved from "https://wolfman.fandom.com/wiki/Lawrence_Talbot?oldid=4276"
Community content is available under CC-BY-SA unless otherwise noted.